Thin Is Not The Only Fit

Thin Is Not The Only Fit 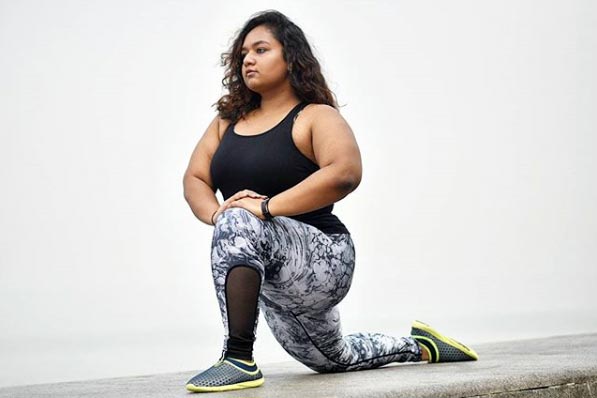 For who believe and see fitness in rock solid six-pack abs, will have their perception and egos crushed by Monica Sahu. Monica, according to the idea of fitness many hold, does not fit into the epitome reputation of fitness. She does not possess the hourglass figure, or just 5-6 flaunting percentage of fat on her body, but there isn’t anything that others can do and she cannot. She will shock your believes to the core about fitness with her spontaneous splits and walking chakrasana. Monica isn’t just your ordinary next-door girl, she is a revolutionary, trying to break the stereotype.

Monica’s journey started with her realization of losing herself to the desk job at which she spent nearly 12-16 hours each day. She was a banker in Ahmedabad and her busy life didn’t allow her to make healthy food choices and it wasn’t until the moment she realized that she is a round peg in a square hole. She immediately quit her job and moved to Delhi for her new life. In the capital, she let herself loose and started exploring new personalities for herself. She joined a gym as her first step towards embracing fitness, but soon got bored with it.

Monica was searching for new ways to fit her new-found passion for fitness and it was then that she came across various forms and ideas for fitness on Instagram. She started practising the movements and soon mastered it. Now she is a well appreciated Instagrammer herself, inspiring innumerable individuals through her endeavour of revolutionising the fitness industry.

She doesn’t biasedly speak of one fitness form and in fact respects each one of them. She believes it is just based on an individual’s preference of being comfortable with. Some like running, some swimming and many indulge in weight-lifting, but she maintains that there is space for every form of fitness as long as one is liking it and can practice it regularly. Her wise words are enough to preach her notion of fitness. She says, “Healthy living is not just for external perfection but internal peace as well. Find a balanced way of life and keep walking in the right direction.”

When upon asked, how she deals with criticism on daily basis? Her face suddenly radiates with a grin and she go on to explain that, “Yes eyebrows are still raised when I tell them that I'm an influencer for fitness and healthy living, but I enjoy the shocked look on their face when they witness me performing difficult movements.”

It could easily be felt by her spirit that, she is here to change the perceptions and is not an easy nut to crack under-pressure, and while she is at it, she is going to enjoy every moment of it. The world needs a lot of rebels like Monica Sahu, who just don’t back down upon facing any difficulty, they rather use the situations to better themselves. Swee is proud to be associated with this inspiring young woman, who is on her way of creating a new revolutionary path for others like her to follow.